What lathe do you prefer to work on?

At the moment I have two lathes. The one I've had the longest is an Omega Stubby S750, which I have done all my work on including the tiny turned items inside my ornamental eggs. I've had the lathe for many years and so far it's been brilliant. The only one draw back is that you can't turn anything with a diameter larger than about 29" on it.

I did invest in a second cheaper lathe, the Polaris, so that I had a backup lathe and I've found I can do nearly all my work on it. The other added advantage is that it is also just about light enough to take to demonstrations as well, although it does have to be taken apart first. If I'm doing work larger than 29" in diameter I will use this lathe but for most other work I still favour the subby.

Turning can be dangerous. I expect you to be fully aware of the potential dangers and to take adequate precautions. If you follow any of the advice I have given you do so entirely at your own risk and I cannot be held responsible for any injuries or mishaps that may occur. 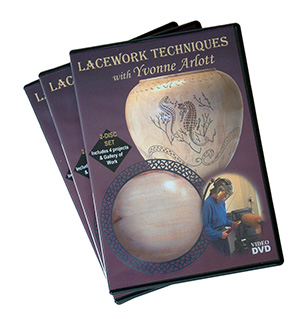 The Woodturning DVD called Lacework Techniques with Yvonne Arlott continues to sell all round the world.