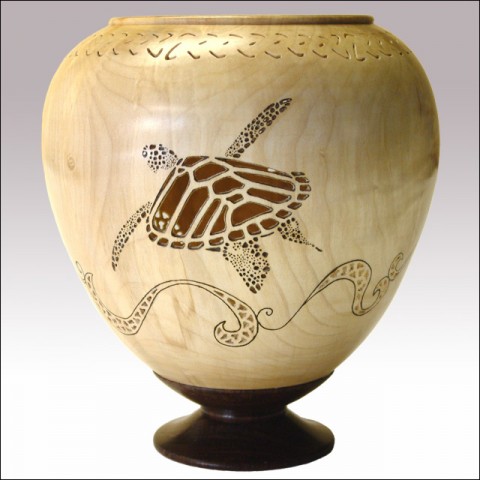 This vase was turned from a piece of Sycamore that had some coloration in it and a natural knot running through part of it. I turned the wall thickness down to about 2mm (1/14”) before then carving a series of holes to form the 2 sea life designs, a turtle and seahorses. I also used pyrography to enhance the very finely detailed parts of these two designs.

Round the bottom of the vase underneath the designs I pyrographed a series of swirls and then carved holes within these lines to form a lacework effect pattern inside the swirls. The overall effect was to give the impression of wild, rolling waves.

The final ornamentation I added to the vase was a Celtic style design, which I carved around the top of it with the idea of creating a piece that echoed the shape and form of the beautiful pottery of Egyptian and Roman times.

The woods used are Sycamore and Rosewood. The overall height of the vase is approximately 230mm (9”).