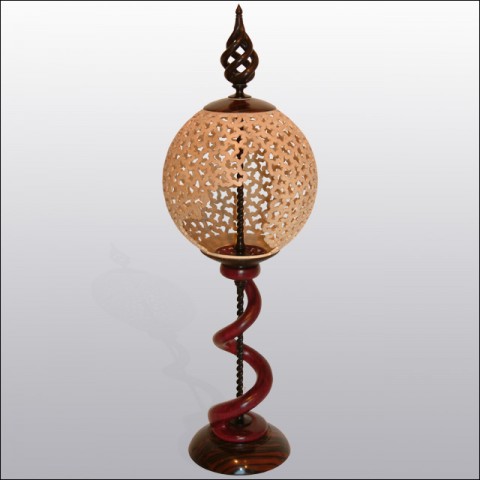 I love the natural jagged rock features often found round the coast of Cornwall. The force of the sea has often carved and torn the rock away creating misshapen caverns that extend back into darkness. These amazing sights have inspired my latest piece, called Cavern. I carved part of the globe away in a jagged shape reminiscent of the entrance of a cavern but instead of darkness inside I have created a triple barley twist stem that winds it's way up from the bottom to top of the form. Another triple barley twist stem continues on beneath the globe to form the stand. I have carved holes in the remaining wood of the globe to create a more delicate form and to give a clearer view of the inside. On the top of the piece is an open barley twist finial. The use of so many barley twists throughout the piece was inspired by the idea of the rolling waves that attack the coast lines, forming the caverns.

The woods used include Sycamore, Ebony, Purpleheart and Fake Ivory.